Grants Focus on Areas with Greatest Potential to Save Lives

DALLAS – September 19, 2016 – Building on its bold goal to reduce current breast cancer deaths by 50 percent in the U.S. over the next decade, Susan G. Komen, the world’s leading breast cancer organization, today announced $32.7 million in new research grants for 2016. Awarded across 23 states and 7 countries, the projects span the entire continuum of breast cancer research, including research into metastatic disease, novel treatments for aggressive types of breast cancer, new technologies and health equity – areas that will make a significant impact in achieving the 50 percent goal.

“For nearly 35 years our organization has been a leader in the fight to end breast cancer, changing how people think about, talk about and treat this disease. Now, with a sharpened focus on our organization’s new strategic direction, we are delighted to announce new research funding that will play a significant role in making our bold goal a reality,” said Komen President and CEO Judy Salerno, M.D., M.S.

“Not only will these grants accelerate our understanding of key areas in breast cancer research, but they include funding for early-career investigators. As federal research dollars become increasingly difficult to secure, these awards give promising young researchers an opportunity to establish their careers, and help ensure breakthrough breast cancer research continues for years to come,” Dr. Salerno added. “Their work is essential to achieving our vision of a world without breast cancer.”

Grants from Komen’s nearly $33 million 2016 research portfolio* – including more than $16 million to early-career investigators – will focus on promising areas in research that have the greatest potential to save lives, including:

“We are so thankful for the friends, family and neighbors who fight alongside us, helping to reduce the number of breast cancer deaths in Ohio, both on the ground and through research,” said Katie Carter, executive director of Komen Columbus. 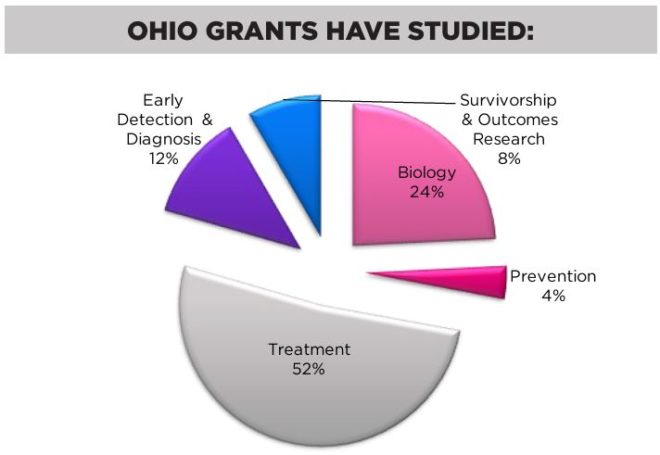 These new funds bring Komen’s total research investment to more than $920 million since opening its doors in 1982, the largest of any nonprofit outside the U.S. government. In addition to research, Komen and its nationwide network of Affiliates serve women and men in thousands of communities. To date, more than $2 billion has been invested in community programs that provide education, screening and treatment support.

Click here to see where Komen research grants are located.

About Susan G. Komen®
Susan G. Komen is the world’s largest breast cancer organization outside of the federal government, funding more breast cancer research than any other nonprofit while providing real-time help to those facing the disease. Since its founding in 1982, Komen has funded more than $920 million in research and provided more than $2 billion in funding to screening, education, treatment and psychosocial support programs. Komen has worked in more than 60 countries worldwide. Komen was founded by Nancy G. Brinker, who promised her sister, Susan G. Komen, that she would end the disease that claimed Suzy’s life. Visit komen.org or call 1-877 GO KOMEN. Connect with us on social at ww5.komen.org/social

*Contingent upon signed and executed contracts with Komen