You are here: Home » Mary Dupler and Cindy Oremus Will Serve as the Athens Race Co-Honorary Chairs 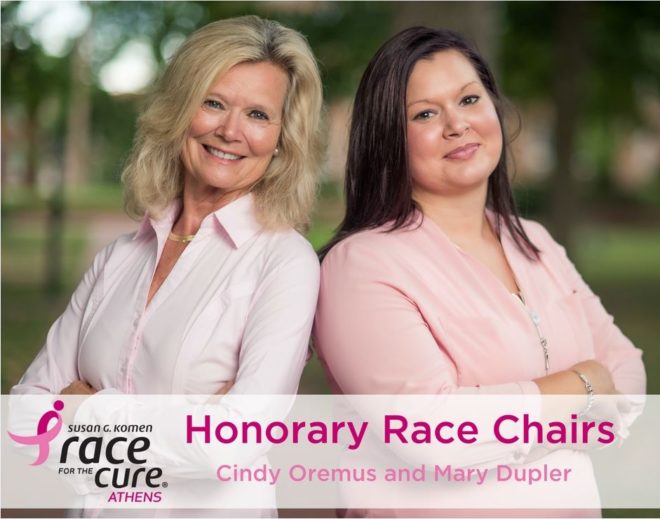 Mary, a resident of Somerset and a single mother of two, was diagnosed with breast cancer in September of 2015. Due to a history of breast cancer within the family, she decided to undergo a double mastectomy and total hysterectomy at the young age of 30.

“My mother had just fought her own battle with breast cancer six years prior. I’m only 30 years old. I [didn’t] want to have to worry. I have two kids that I need to be around to raise,” said Mary. “It wasn’t something we wanted to put off due to my mother’s history.”

Cindy, an Athens resident, discovered a lump in her left breast during a routine check-up at the age of 31. After years of extensive treatments, surgeries, etc., Cindy is proud to announce that she has been in remission for the past 16 years.

“My advice is to be proactive, don’t disregard it. Get a second opinion if you aren’t satisfied with the results,” Oremus stated. “I didn’t think my lump was anything [in the beginning], but my gynecologist pushed me to get tested. Early detection is key.”

When Mary received her breast cancer diagnosis, her employer, at the time, did not offer healthcare and out of pocket costs were too high. Mary struggled with the thought of having to choose between “paying for [her] surgery or putting dinner on the table for [her] children.” Thanks to a funding from Komen Columbus, Mary’s mammogram, surgical consultation, biopsy, pathology, and follow-up surgical appointment were covered by a community grant to Fairfield Medical Center.

Cindy received medications (Tamoxifen and Adriamycin) researched and tested by Susan G. Komen® funded researchers to aid in the treatment and prevention of breast cancer. She also serves as a Rally for the Cure Ambassador for the Athens Country Club, hosting an annual golf outing. Over the past 16 years that Cindy has been the Rally Ambassador, her group has raised a total of $46,000 to help women and families in southeast Ohio gain access to care.

Proceeds from the Second Annual Athens Race for the Cure® will help women like Mary and Cindy receive life-saving treatments to fight breast cancer.

For more information and to register for the Athens Race for the Cure®, click here.