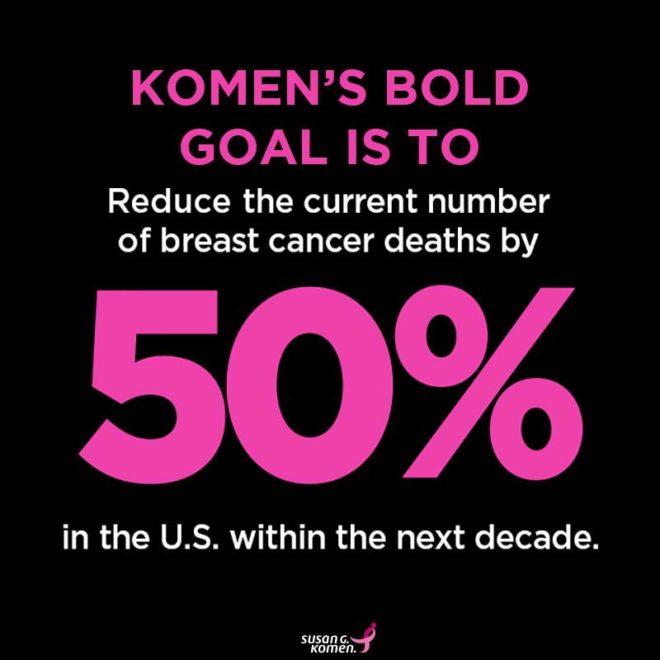 “We know that people die of breast cancer for two reasons: a lack of high-quality breast cancer care accessible to everyone, and a lack of treatments for the most aggressive and deadly forms of this disease,” said Dr. Judith A. Salerno, president and CEO of Susan G. Komen. “We are taking direct action designed to solve these problems to reduce breast cancer deaths by half in the U.S. within the next decade.”

Salerno said today that Fund II Foundation made a grant worth approximately $27 million for a  program initially targeting 10 metropolitan areas to significantly reduce what she called the “appalling” difference in death rates between African-American and white women. African-American women are nearly 40 percent more likely to die of breast cancer than white women; in some cities, that gap is as high as 74 percent.

“This constitutes a public health crisis that must be addressed, first in the cities where these death rates are highest, and then in all areas of the country,” Salerno said.

Fund II Foundation President, Robert F. Smith said, “No longer should African-American women be more likely to die from a breast cancer diagnosis than others. Through this grant supporting Susan G. Komen, Fund II Foundation will help address these unfair disparities across our country.”

Komen’s African-American Health Equity Initiative targets cities where mortality rates and late-stage diagnosis of African-American women are highest. The goal: to reduce the mortality gap by 25 percent within five years of beginning work in each city.

The initial targeted cities are Memphis, Tenn., St. Louis, Mo., Dallas, Los Angeles, Virginia Beach, Va., Atlanta, Chicago, Houston, Washington, D.C. and Philadelphia.  Baltimore and Detroit have been identified as high-priority areas as the program expands over the next year.

The organization has invested more than $2 billion over 34 years for these programs aimed at uninsured, under-insured, and medically vulnerable populations.

“We will never waver from our commitment to remove barriers of language, geography, economics or culture for all people facing this disease.  Every woman or man must be able to access and receive high-quality breast health and breast cancer care, be supported through their treatment and into survivorship,” Salerno said.

The second prong of Komen’s plan enhances Komen’s focus on aggressive forms of breast cancer and metastatic disease (stage IV or cancer that has spread to other parts of the body).

The new initiative aims to advance research into new treatments for aggressive and metastatic disease. Komen also will seek to leverage next-generation technology that can detect breast cancer at its very earliest stages to prevent recurrence and metastasis.

Salerno said Komen’s bold goal builds on the progress of the breast cancer movement since Komen was founded in 1982. “Death rates from breast cancer have declined by 37 percent since 1990. We have more treatments than at any time in our history. We’ve come a very long way from a time when breast cancer couldn’t be discussed publicly. Our new bold goal requires us to take a deeper dive and stretch further to ensure that every woman or man can be told, ‘There is help and hope for you.’”

Susan G. Komen is the world’s largest breast cancer organization, funding more breast cancer research than any other nonprofit outside of the federal government while providing real-time help to those facing the disease. Since its founding in 1982, Komen has funded more than $920 million in research and provided more than $2 billion in funding to screening, education, treatment and psychosocial support programs serving millions of people in more than 30 countries worldwide. Komen was founded by Nancy G. Brinker, who promised her sister, Susan G. Komen, that she would end the disease that claimed Suzy’s life. Visit komen.org or call 1-877 GO KOMEN. Connect with us on social at ww5.komen.org/social.

Fund II Foundation makes grants to 501(c)(3) public charities in five areas:  1) preservation of the African-American experience, 2) safeguarding human dignity by giving a voice to the voiceless and promoting human rights 3) improving environmental conservation and providing outdoor education that enables people of all ages and backgrounds to enjoy the numerous benefits of the great outdoors 4) facilitating music education, particularly in primary and secondary schools, to nourish both the mind and the soul 5) and sustaining the uniquely American values of entrepreneurship, empowerment, innovation and security.  For more information on Fund II Foundation, visit www.fund2foundation.org.